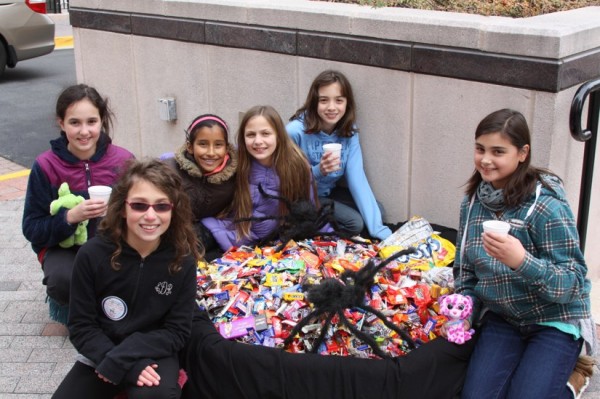 A lot of candy and a lot of cash — Orthodontist Stephan Tisseront’s 8th Annual Halloween Candy Buy-Back Event benefiting Children’s National Medical Center and overseas troops tallied 1,575 lbs. of candy donated from area children. Dr. Tisseront’s office paid $2 per each pound donated – $1 to the person donating and $1 to Children’s National Medical Center in D.C. This year’s haul raised more than $3,700 for the hospital. The candy itself will be sent to servicemen and women for a little Halloween from home.

What to name the baby? — The Smithsonian is asking for your help in naming the baby panda cub born at the National Zoo in August. To see the choices and cast your vote visit the zoo’s website. [National Zoo]

Silver Line sooner? — Metro’s Silver Line is getting closer to an opening date, though none has been set yet. The Metropolitan Washington Airports Authority is scheduled to turn the new rail line, which will run from Tysons Corner to Reston’s Wiehle Avenue, over to Metro Nov. 19. Metro says it needs 90 days of testing, which means the line may see its first passengers by mid-February. Some Metro-watchers have been predicting as late as March. [WTOP]

Virginia Attorney General Still Too Close to Call — The race between Mark Herring (D) and Mark Obenshain (R)  is still as close as can be and will likely go to a recount. With 100 percent of precincts reporting, Obenshain has a 281-vote lead. The Virginia State Board of Elections is scheduled to certify the entire count Nov. 25. After that, the trailing candidate ask for a recount. [Washington Post]