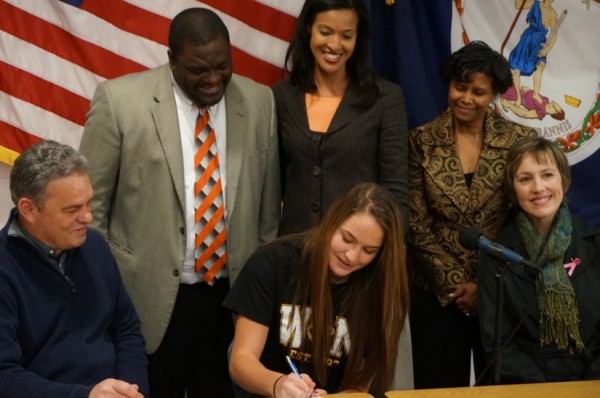 Rendle, a 6-foot-4 senior, averaged 12 points, 8 rebounds and 7 blocks last season. She has been a four-year starter at South Lakes.

She will be one of nine Seahawks returning to the varsity team that went 23-6 and made it to the VHSL state tournament in 2013.

“To see the process from your freshman year on varsity to signing a letter of intent, I am so proud and honored to have had you represent our basketball program,” said Seahawks coach Christy Winters Scott, herself a former start player at the school who went on to play at University of Maryland.

Rendle is the first girls basketball player in 15 years to sign with an NCAA Division I program, said South Lakes Director of Student Activities Linda Jones.

END_OF_DOCUMENT_TOKEN_TO_BE_REPLACED

More Stories
Comprehensive Plan Goes to County Planning, Along With Caveats, ComplaintsColin Mills: Searching for RCA’s 2013 Citizen of the Year