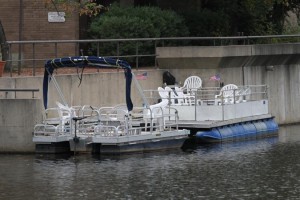 Reston Association is working on offering Lake Anne residents clearer rules if they want to use an air conditioning system other than RELAC.

RELAC (or Reston Lake Anne Air Conditioning Corporation) – has been the cooling system for about 300 Lake Anne-area homes since the mid-1960s. The system is powered by recirculated lake water from Lake Anne. Touted as state-of-the-art when it was built, nearly 50 years later it is oft-criticized by users for being inefficient.

RELAC had been operated by Aqua Virginia, but earlier this year it was sold to a group of local businessmen.

RA’s Board of Directors recently sent RELAC users an updated amendment, which will be voted on by the board at Thursday’s regular monthly meeting.

Many RELAC customers have complained that the system does not provide enough cooling and that homes remain humid in hot months, exacerbating allergies.

Under the new amendment, residents can show a note from a medical professional showing cause to add an additional system (but the system cannot be a window unit). Residents will be granted a temporary, one-year exemption.

“At each renewal, the requesting resident must establish that there is still a handicapped, person who requires an accommodation residing in the home and that the RELAC cooling system is still inadequate to allow the handicapped person  to reside in the home without supplemental air-conditioning,” says the amendment.

Residents must also show a report from a certified HVAC technician familiar with RELAC “who can show that the central air-conditioning system in the home is in good repair and is operating properly so that it can be established that the need for a supplemental air conditioning system is due to inadequacy of the water serving the home rather than a mechanical deficiency with the equipment serving.”

Also on the amendment and in the RA covenants: Residents cannot terminate their RELAC service despite the additional system.

In 2005, a petition was signed by residents of 160 homes and RA put replacing RELAC to referendum. Residents voted 130-100 to keep the system, falling short of the three-fourths necessary to move it forward. In 2011, RA adopted the provision that will allow some RELAC users to add a supplemental system. In the summer of 2012, there was concern by residents and Knueven over low water levels that could not adequately power the system.

The new owners have said they hope to install improvements, including a cooling tower, to make RELAC run more efficiently.

Is it time to put RELAC to rest? Or at least let Lake Anne residents choose what kind of cooling system to put in homes? Tell us in the comments.