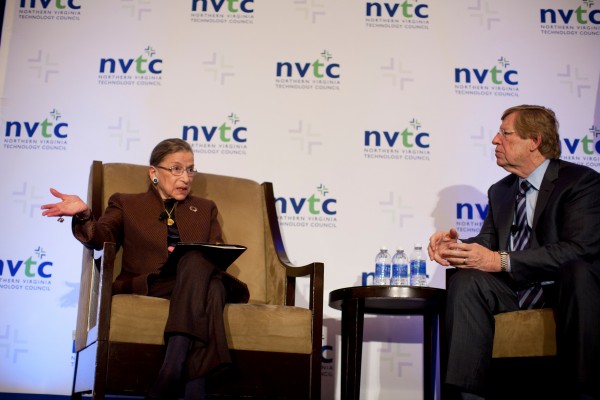 Ginsburg, who did an informal Q and A with former Solicitor General Ted Olson and also took questions from the audience, also talked about how far women have advanced since she became a Supreme Court justice 20 years ago, about how the court decides which cases to hear, and about how the justices respect one another professionally.

Said Justice Ginsburg about conservative Justice Antonin Scalia: “When I first met him I disagreed with everything he said, but he was utterly captivating.”

Among the other topics discussed:

* Term limits for justices, who are appointed for life.

Justice Ginsburg pointed out that Article 3 of the U.S. Constitution says Justice shall “hold their offices during good behavior.”

“In some parts of the world I would have been gone years ago as there is a mandatory retirement age,” she said. “But it would take a constitutional amendment to change that, and our constitution is powerfully hard to amend as any proponent of the Equal Rights Amendment or Statehood for D.C. knows.”

“Corporations count as a person for some purposes and not for others,” she said. “Corporations don’t march to the polls to cast their ballot. Sometimes they are considered persons, an entity is entitled to due process just as an individual is. The same is true for equal protection. We will continue to have questions to the extent whether a corporation is person or an artificial entity.”

* Work-life balance for women. Justice Ginsburg said her most important asset — a supportive husband. Ginsburg was married to fellow lawyer Martin Ginsburg for 56 years before his death in 2010.

“I have two children and they are 10 years apart,” said Justice Ginsburg. “When my daughter was at school, it was unusual to have a working mom. Ten years later, when my son was in school in the late 1960s, there had been a tremendous transformation. But the greatest asset is to have a supportive spouse — someone who thinks your work is as important as his. ”