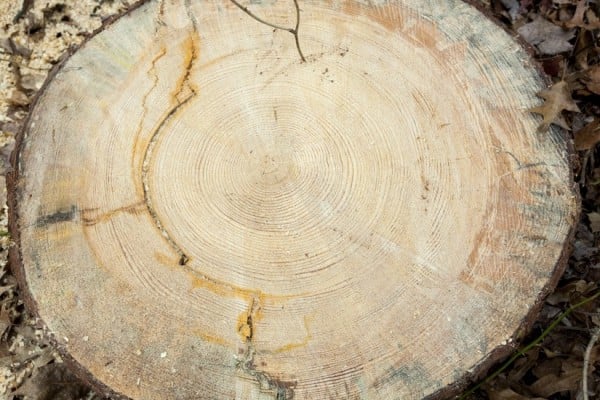 When the Derecho blew through Reston in late June of 2012, its 75-mph winds cut a swath of destruction, including knocking down dozens of trees.

Among the victims: a 106-foot Virginia Pine near the Reston South Park and Ride Lot at Lawyers Road and Reston Parkway.

Fairfax Tree Commission officials and Reston Association staffers gathered at the site of the fallen tree last week to give the old guy a proper sendoff.

See, the tree was a former national and reigning state champion when it met its demise.

The big tree first got the attention of Robert Vickers, chairman of the Fairfax tree commission, in 2009 when he was waiting at a traffic light at the corner of Reston Parkway and Lawyers Road.

Vickers measured it and found it was 82 inches around and had a crown that spanned 39 feet. That’s when he called Jeff Kirwan from Virginia Tech. Kirwan is the keeper of the Virginia Big Tree database .

The men found that the giant pine was the tallest tree of its kind in the country. It was then included in the National Register of Big Trees, a publication produced by American Forests, a nonprofit conservation organization.

Alas, the Reston tree lost the national title when a larger Virginia Pine found in West Virginia in 2010.

But Reston’s tree still was the state champ. That is, until the Derecho blew through.

The fallen giant lay undisturbed until last week, when tree commissioners decided to cut a few cross sections– called “cookies” by tree folks — to be made into plaques and displayed at county and Reston Association offices. RA Environmental Resource Manager Claudia Thompson-Deahl says Reston’s will be displayed at Nature House at Walker Nature Center.

“It’s kind of cool that Reston Association had a national champion tree,” she said.

Indeed, the tree had stood a long time. The tree experts — who cut five cookies from the trunk — counted 125 rings, which makes the tree more than 200 years old.

The rest of the tree will be left where it fell, said Thompson-Deahl.

“It will decompose naturally,” she says. “It is in a heavily wooded area and there is no threat to being on the ground.”

Fairfax County says that the county was home to three national champion trees for many years. With the demise of Reston’s pine and of a dethroned champion chestnut in McLean in 2010, just one champ remains — a giant paw paw growing by Potomac River in Great Falls.