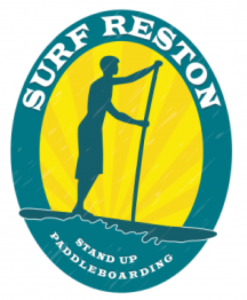 The standup paddleboard business that planned to launch last year at Reston’s Lake Audubon has a new owner, and possibly a new location.

Late last summer, Reston Association’s Board of Directors passed a motion to allow to allow Surf Reston Standup Paddleboard Adventures to do business from summer 2013 through Fall 2014 at the all-residential lake.
Many directors said they thought the limited term would allow the board to determine (and hear from residents) whether there was any negative impact.

After receiving many complaints from Lake Audubon area residents that the operation would cause problems at the lake, South Lakes Director Richard Chew presented the idea that the board should reconsider its decision. However, the board stuck with its approval.

But the board lessons at Lake Audubon never materialized. Among the reasons: owner Chris Higgins was transferred out of town and RA needed more time to consider the terms of the agreement with SUP Reston.

The business is now owned by Reston resident and certified paddleboard instructor Steve Gurney, who is rethinking where and what kind of business SUP Reston should be.

Gurney, who will meet with RA’s board this week to discuss paddleboarding, has also met with the Lake Anne Merchants Association, which “expressed great interest in having this type of recreational program centered at Lake Anne,” says RA.

There was lots of negative reaction from some Lake Audubon residents in 2013. They said having a commercial operation at the all-residential Lake Audubon would take away from the quiet and private atmosphere there. Lake Anne, they countered, already has boat rentals and it centered on a commercial area.

Gurney has suggested two days/evenings of paddleboard instruction on Lake Anne per week, and no more than three intermediate level classes per month at Lake Audubon, all to be closely scheduled with RA staff to avoid conflicts with other users and events.

Additionally, there will be no rental fleet of paddleboards at any Reston lake, RA says. That was also a concern for Lake Audubon residents who did not want people from out of the area flocking to RA property.

At Lake Anne, SUP Reston may be able to expand into paddleboard yoga — where users perform yoga poses on the boards on the lake for a good core and balance workout. RA staff has met with a Tysons Corner-area yoga studio that is interesting in renting or purchasing space at at Lake Anne Village Center and would like to offer paddleboard yoga classes.

RA says its staff will evaluate both requests, and facilitate the coordination between two groups for a more seamless function in an effort to bring paddle

The RA Board will likely revisit the paddleboard plans at Monday’s board planning meeting and at its Feb. 27 regular meeting.