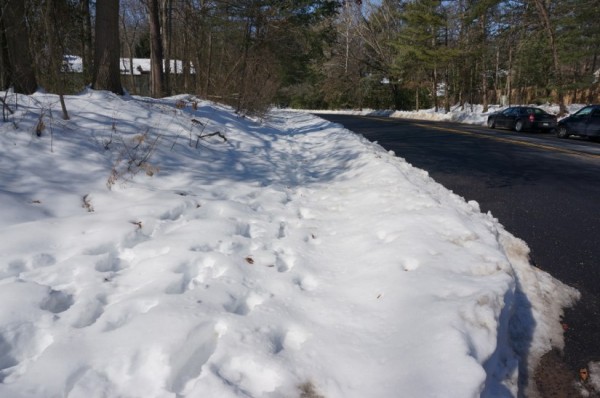 As winter continues its grip on Northern Virginia, snow was on the mind of Reston Association’s Board of Directors on Thursday. Specifically, how to remove it after a big storm.

RA CEO Cate Fulkerson said she has heard from many citizens since more than a foot fell here two weeks ago. While RA is responsible for plowing its 55 miles of paths and RA-owned property, many citizens want to know if there is something the association can do to ensure that walkways and sidewalks are clear, especially near schools.

Many sidewalks were still snow covered days after the storm, causing students to walk or wait for the bus in the street.

“There has been lots of concern and I have gotten lots lots of calls about lack of accessibility,” said Fulkerson. “We take seriously clearing pathways and moving people moving from one part of community to another. We decided it was important to look at what we can do as a community.”

Fairfax County Supervisor Sharon Bulova said at this week’s Board of Supervisors meeting that the county will also look at its snow removal policies. Currently, Fairfax has no ordinance that says residents must remove snow from sidewalks near their property.”

RA will undertake three things in the snow removal area:

* Discuss with the county whether RA could use its equipment to plow sidewalks and walkways crucial to connectivity in Reston, particularly near Metro’s Wiehle-Reston East station. This would not be all the “miles and miles of” sidewalks in Reston, says RA Parks and Recreation Director Larry Butler, but rather a series of walkways on streets such as Sunrise Valley Drive and Wiehle Avenue.

RA would not charge the county for the service and it would involve minimal labor, said Butler.

However, there would be legal implications in these good intentions, said RA attorney David Chadwick.

“Virginia is a very strong private property state,” he said. “You cannot do something on someone else’s property without permission. Going on someone’s property can create a legal liability, and that automatically puts you at risk.”

After the record snowfall of February 2010, RA encouraged members to volunteer to shovel, and many of them did, helping clear routes in and around Reston schools.

One caveat: Most homes are not on main streets in Reston, pointed out South Lakes director Richard Chew. No homes are located on Ridge Heights Road, for instance, where sidewalks lead to three schools. Even if you mobilized people to shovel in their own clusters, would that help the school routes?

* Send a letter written by the PBAC to the Northern Regional Park Authority to encourage better plowing and de-icing of the W & OD Trail, which runs through Reston.

“For Reston residents, the W&OD is more than just a recreational facility — it is the backbone of the network of roads and paths that connects Reston to other destinations in the region and makes cycling a viable means of transportation,” the letter states.