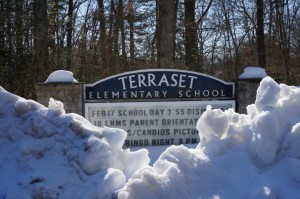 Welcome to Snow Day No. 9 and, most likely tomorrow, No. 10 for Fairfax County Public Schools students.

By any measurement, it has been a rough winter in Fairfax County, with the most snow days taken since the “snowpocalypse” season of 2009-10.

To make up snow days, FCPS students have already given up Presidents Day and will attend school on April 7, a scheduled teacher workday.

The good news? If Tuesday is a snow day, that one gets a free pass and won’t have to be made up. But if there are 11 or more this season, those days will also be added to the end of the year or possibly added in as extra time in the school day, says FCPS calendar info.

Virginia law requires public schools to provide at least 180 days or 990 hours of instructional time annually. But it also allows the state Board of Education to waive the requirement if districts shut down in the aftermath of a state of emergency declared by the governor.

School board at-large member Ryan McElveen says a waiver request will likely be in the works.

“The school board hasn’t formally talked about requesting a waiver yet, but I think it would be wise to do so,” he said on Monday. ” I’m sure we’ll have that discussion in the coming weeks. Both this storm and the previous storm were ‘states of emergency,’ so these days could all be considered for the waiver.”

FCPS was last granted a waiver from the requirement in 2010 following the nearly two-feet of snow that fell in back-to-back February storms.  The district needed to schedule five make-up days, but only found time for four in the spring calendar. The board waived the requirement for the fifth make up day.