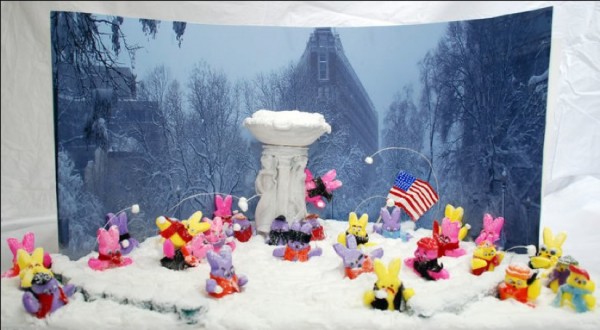 Who is ready to re-imagine Reston — built out of Peeps?

Chesapeake Chocolates at Lake Anne Plaza is holding its own Peeps Show, much like the popular annual contest run by The Washington Post.

Instead of Mad Men or Ben’s Chili Bowl or the Congressional chamber constructed out of the Easter confection, think about a Reston tableau in honor of Reston’s 50th anniversary and founder Robert Simon’s 100th birthday.

You won’t even have to run the plans by the Reston Association’s Design Review Board.

Chesapeake Chocolates says entrants should deliver their shoebox-size diorama to the store at 11426 Washington Plaza West. The store will keep it on display through Founder’s Day on April 5. A panel of judges will win a basket of Chesapeake Chocolates.