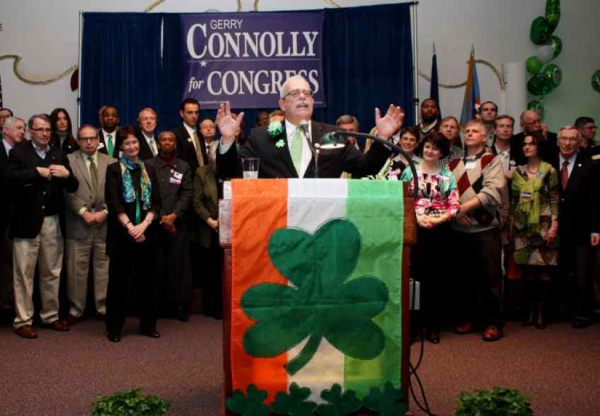 Congressman Gerry Connolly (D-Va 11th) is expected to begin his 2014 campaign for re-election at his 20th annual St. Patrick’s Day Fete in Fairfax on Monday, March 17.

Connolly’s party, which begins at 7 p.m at the Kena Shriners’ Temple, 9001 Arlington Blvd., is expected to draw Democratic supporters, officials and candidates from all over Northern Virginia, his office said.

Connolly is serving his third Congressional term and is expected to run for a fourth. The 11th District encompasses Reston and most of Fairfax County, as well as part of Prince William County. The 11th District Republicans will announce a nominee to challenge Connolly after its May 10 convention. Also running is Independent Mark Gibson.

Monday’s event will feature two straw polls to assess the strength of the candidates seeking the Democratic nomination for the U.S. House of Representatives in the 8th and 10th Congressional Districts, where incumbents Jim Moran and Frank Wolf will not be running for re-election.

In the 10th District, which includes Herndon, Wolf is retiring after 17 terms. Dranesville Supervisor John Foust is running for the Democratic nod.  For the Republicans, State Del. Barbara Comstock is considered the frontrunner.

Connolly began hosting the annual event when he was first elected to the Fairfax County Board of Supervisors in 1995 and has continued the tradition through his 10 elections.