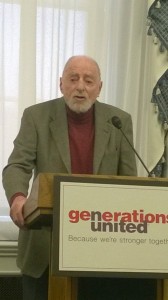 Reston founder Robert E. Simon was on Capitol Hill on Tuesday where the 99 year old — and the community — was honored with an America’s Best Intergenerational Communities Award.

The award was given by the MetLife Foundation and Generations United to four communities this year. The awards are designed to heighten awareness of the importance intergenerational solidarity plays in building strong, supportive communities.

“It takes a great deal of effort and forward thinking to create a community where members of every generation want to live,” says Donna Butts, executive director of the nonprofit Generations United. “Reston has worked to ensure its residents enjoy a vibrant, meaningful place to live, are treated with respect and care, and have ample opportunity to work together for the betterment of all.”

“Todays’ ceremony is just another wonderful example of Reston continuing to live up to Bob’s founding principles,” said RA president Ken Knueven. “Seeing young children and the [nearly] 100-year-old Bob Simon standing together says it all.”

An “intergenerational community” consists of individuals of all ages who are an integral part of the community, as “reflected in the families, structures, facilities and services that children, youth and older adults encounter in the community as well as in day-to-day interactions and relationships,” says Generations United, a coalition of more than 100 groups focused on improving lives of citizens of all ages.

What makes a quality intergenerational community?

In it’s application, Reston pointed out that it is “intent on being age-intentional.”

Says Reston For a Lifetime:

“That means there are no senior centers. Instead, older adult programming is blended with those of children and youth at the Reston Community Center. There’s also the Robert E. Simon Children’s Center inside the Cameron Glen Care Center nursing home, where children and older residents interact daily, making the Care Center an intergenerational shared site.

Today, the Reston Association continues to uphold Simon’s belief that open spaces and outdoor recreational amenities serve as meeting grounds for people of all ages.”

The other award recipients are the communities of Maricopa County, AZ; City of Parkland, FL and Village of Shorewood, WI. Two other communities were named National Finalists: Miami Gardens, FL and Rye, NY.

“This honor recognizes Reston as an intergenerational community in which individuals of all ages are an integral and valued part of the setting,” wrote Warner. “This perspective is reflected in the families, structures, facilities and services that children, youth and older adults encounter in the community. … I commend all those who continue to help strengthen the Reston community and improve the lives of others.”