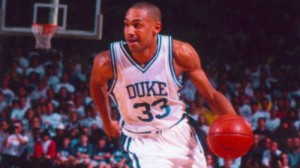 Grant Hill, the former South Lakes High School star and three-time All-America at Duke University, has been selected as a 2014 inductee to the National Collegiate Basketball Hall of Fame.

Hill will join Shaquille O’Neal, who played three seasons at Louisiana State University prior to becoming a NBA star, as well as former Maryland coach Gary Williams, in the 2014 group.

Hill, whose father, Calvin, played for the Washington Redskins, grew up in Reston. He attended area public schools, graduating from from South Lakes High School in 1990. He is a member of the SLHS Athletic Hall of Fame.

He went on to win two NCAA championships at Duke.

Hill played 18 season in the NBA. He was a NBA All Star seven times, but was plagued by injuries throughout his long career.

He retired from the NBA in June of 2013. At that time, there was much discussion about whether the former NBA Rookie of the Year was Naismith Memorial (Pro) Basketball Hall of Fame material.

Hill and the rest of the new college hall members will be inducted in Kansas City in November.

Hill is currently a basketball analyst for Turner Sports and a member of the Naismith Memorial Basketball Hall of Fame Board of Governors.

In 2012, Hill was selected by the Naismith Memorial Hall of Fame as a 2012 recipient of the Mannie Jackson Basketball Human Spirit Award.

Winners of that award, named for the founder of the Harlem Globetrotters, were selected for “embracing the core values of the game through hard work, dedication, and resilience; striving to continuously improve the community they serve; and making an ongoing commitment to others,” says the Hall of Fame website.