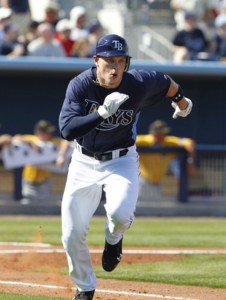 Guyer, a 2004 HHS grad who also played at University of Virginia, has made brief stops in the big leagues, most notably in a playoff push at the end of the 2011 season. After injuries in 2012, the outfielder spent 2013 season at Triple-A Durham, where he hit .301 with seven home runs, 41 RBIs and 22 steals. His .301 mark was fifth best in the International League.

Through Tuesday, Guyer was hitting .289 with three doubles and one RBI this spring.

“You haven’t seen a lot here, but we really like what [Guyer has] done in Triple-A, combination of skill and the metrics that are behind him indicate this guy should be a pretty good baseball player,” Rays Manager Joe Maddon told MLB.com. “So we decided to keep him.”

Guyer, 28, says making an Opening Day roster has been a dream of his.

“I’m really excited for the opportunity,” Guyer said. “I’ve worked my whole life to try and make an Opening Day roster and be up here. … Now the hard work starts. I have to keep grinding and doing everything I can to help the team win.”