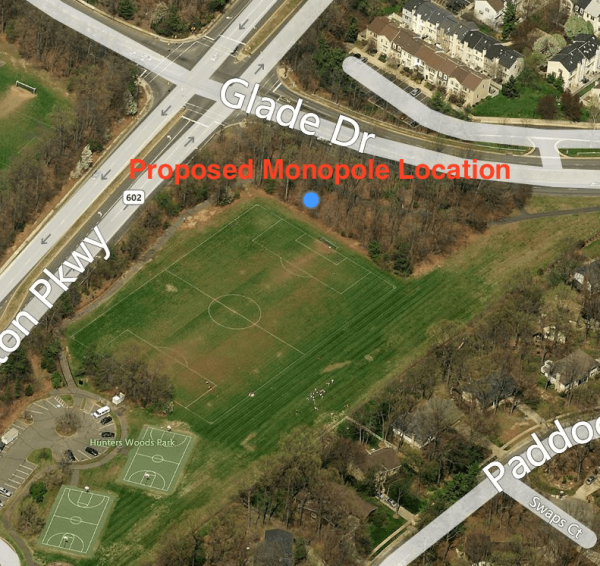 Residents who live in the Hunters Woods section of Reston have been notified about plans for a new cell phone tower that may be built on the edge of Hunters Woods Park.

The proposal is for a 115-foot monopole that would be located in the wooded area behind the soccer field at the park off of Reston Parkway. The equipment will be located in a fenced-in and secured shelter at the park, which is part of Reston Association.

The proposal comes from AT&T and Milestone Communications, a Reston firm that develops partnerships between cell phone companies and landowners (such as schools and towns) for tower locations.

There will be a public meeting on the subject at 7 p.m. on May 12 at Reston Community Center Hunters Woods.

The proposal to put the pole on RA-owned land would have to go through RA’s Design Review Board., says Larry Butler, RA’s Parks and Recreation Director. It would also go through the Fairfax County Planning Commission and the Board of Supervisors.

There have been two proposals in the past to build a tower on RA property, says Butler. One request was dropped by the carrier; the other was not approved by the DRB.

The alternative is putting them in more prominent places, he said, and pouring that money into a privately-owned property, instead of into the schools, Milestone CEO Len Forkas has said.

As citizens add more wireless devices to their collections, wireless traffic is expected to grow exponentially. Milestone estimates that data traffic in 2015 will be 56 times the volume it was in 2009. What’s more, the poles must be located close to the people (and the devices) they are serving.