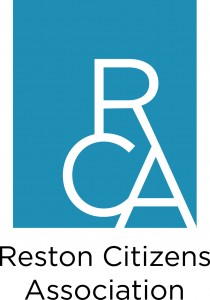 The Reston Citizens Association (RCA) says it is changing its election process and structure in order to be more in line with other Reston-based organizations and position RCA for continuing its active role in Reston.

Starting in 2014, the president of RCA will be elected by its Board of Directors instead of being elected directly by Reston citizens during RCA’s annual elections held in each June of every year.

At its first meeting after every annual election, the RCA will now elect the President, who must be a Director who has served on the Board for at least a year. As in the past, Vice President, Secretary and Treasurer will also be elected at this meeting.

This is the same process Reston Association uses to elect its officers.

While the President will continue to serve a one-year term at the pleasure of a new board, RCA has changed the terms served by its elected directors from the current two-years to three-year terms.

“The Board has been evaluating changes to its electoral process to best enable RCA’s mission of supporting and recommending smart growth solutions for Reston,” said RCA president Colin Mills. “After many months of consideration, the Board amended its bylaws to reflect these changes as of the 2014 elections.”

The RCA Board will continue to have 13 seats representing four Districts and At-Large positions as before, but those seats have been divided into three groups that will each come up for reelection as a class.

A call for candidates was announced by RCA, and more information about the election can be found on RCA’s website.

Meanwhile, Mills said he will not run for another term on the RCA board. Mills, who ran for an RA at-large director seat this spring, has served eight years on the RCA Board, including three as president.

Terry Maynard, RCA board member from the South Lakes district and well-regarded analyst on all things Reston, also plans to retire at the end of the current term to continue his leadership and activities at Reston2020, a RCA committee that he co-chairs.

Dick Rogers, RCA Board member from the Lake Anne/Tall Oaks/Reston Town Center District, is also retiring at the end of this term, but will continue to drive RCA’s transportation planning issues.  He serves on both RCA’s and Reston Association’s transportation committees.