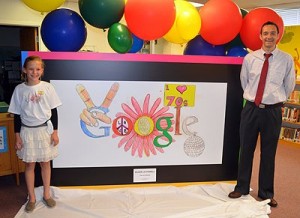 Tim Stanley, a retired FCPS administrator, had been serving as the school’s interim principal for 2013-14 after former principal Beth English retired last year.

Mr. West brings a wealth of knowledge and experience to the principalship. Under his leadership, his current school earned a three-year waiver from annual accreditation due to “achievement of SOL passing rates of 95% or higher in all four tested SOL content areas for two consecutive years” — only 5% of schools in the state earned this waiver.

His school also received the Virginia Board of Education Excellence Award for advanced learning and achievement, and was recognized as “Best Elementary School” in Northern Virginia Magazine. In Alexandria, Mr. West served as the Lead Principal for Curriculum and Instruction for the city’s schools.

In 2004 he moved to Arizona where he taught, served as an instructional and technology coach and instruction specialist. In 2005, Mr. West was promoted to assistant principal and then principal of Canyon Ridge School. Canyon Ridge is the division’s Math, Science & Technology Concept School and also includes the District Gifted Program. Under Mr. West’s leadership Canyon Ridge emphasized 21st century learning and instructional innovation, including problem-based learning, content and technology integration across all grade levels. Mr. West was recognized as a “Visionary Administrator” at Canyon Ridge.

Mr. West earned his B.S. at James Madison University, his Masters of Education at Marymount University, and his Certificate in Ed. Administration at Arizona State University West.