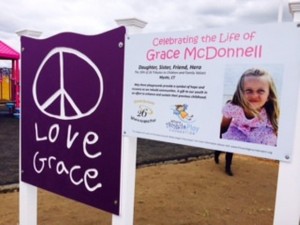 A man living in Herndon has been arrested after signs memorializing victims of the Sandy Hook Elementary School shootings were found in his possession.

The signs had recently been reported stolen from a playground in Mantoloking, N.J., and from Mystic, Conn.

The signs were each dedicated to victims of the 2012 mass shooting at Sandy Hook Elementary School: 7-year-old Chase Kowalski and 7-year-old Grace McDonnell.

Andrew David Truelove, 28, was charged with possession of stolen property, Herndon Police said. Additional charges are pending in the other two states, they added. Truelove is being held at the Fairfax County Adult Detention Center.

The memorial signs were recovered at a home in the 400 block of Fillmore Street in Herndon where Truelove rented a room, police said. The Herndon investigation began after a tip from the Stonington (Conn.) Police Department.

Twenty children and six adults were killed in the December 2012 shooting in Newtown, Conn.

NBC Connecticut reported earlier this month that, after a 50-pound vinyl peace sign was stolen from a Mystic playground honoring the memory of McDonnell, a man called her mother to tell her that he believed the Sandy Hook shooting was a hoax and that her “daughter never existed.”