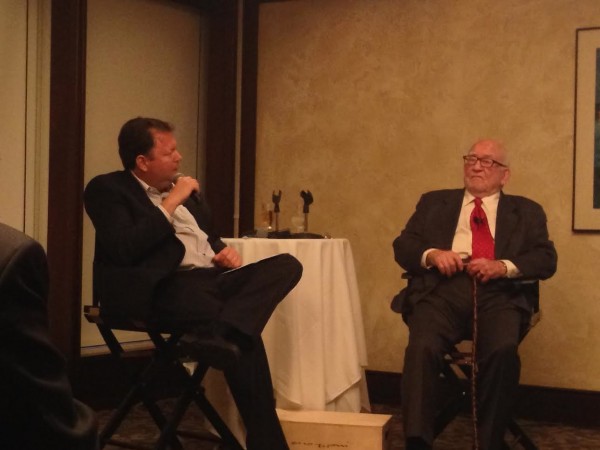 Asner, whose short film Good Men was screened last year during the Festival, said he was impressed with the Festival and its mission and volunteered to help raise money for the October festival that takes place in Reston and other Northern Virginia locations.

Held at the Tower Club, the private fundraiser with a variety of local business leaders featured a Q & A session with Asner.

The festival’s motto is “Story Can Change the World,” and the festival will feature more than 40 films along that theme.

In keeping with the festival’s vision, all box office net proceeds will be donated to a charity that then becomes the subject of a short film debuting at the festival. Last year, proceeds benefitted Shelter House, a local nonprofit working to alleviate homelessness.

The lineup of films for the 2014 festival will be announced at a later date.

Nothing Bundt Cakes plans to bring its tiered bundt cakes, bundtlets, and other sweet options to the Town of Herndon. Exterior signs posted in Herndon Centre indicate the business has…

An illustration of a coronavirus (via CDC/Unsplash) In many ways, this past Thanksgiving weekend looked much more normal than last year’s isolated celebrations. COVID-19 vaccines enabled many people to gather…

The latest Legal Insider discusses the confusion by security clearance holders and their ability to use marijuana.