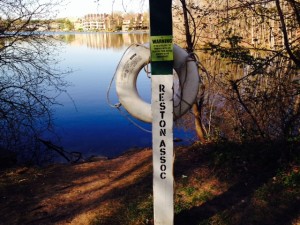 Reston Association is investigating what maybe causing hundreds of fish to turn up dead in Lake Thoreau.

In the last several days, RA staff has picked up 110 dead fish and residents have reported another 100, says RA Watershed manager Nikki Bellezza.

“I would say there are about 200 fish that have shown up dead at Lake Thoreau since the first report on Thursday, May 29,” Bellezza said. “The fish were primarily panfish like blue gills, but we also found largemouth bass, catfish, and black crappie.”

RA is working with Aquatic Environmental Consultants, Inc. (AEC), which has been helping the association solve lake issues for the last 15 years, said Bellezza.

AEC visits Reston lakes each month in the summer and have a good baseline knowledge of lake conditions, Bellezza said. While Thoreau is the only Reston lake experiencing a fish kill, AEC staff says it has seen similar fish kills in other area lakes.

RA does not believe toxins are responsible for the fish kill at Lake Thoreau, said Bellezza.

Bellezza said that AEC suggested it might be Columnaris Disease, which comes about when there is a lot of stress on the fish at this time of year.

The recent 90-degree weather,  followed by a cold spell and heavy rains, as well as stress from spawning at this time of year, could be the cause of the kill, according to AEC.