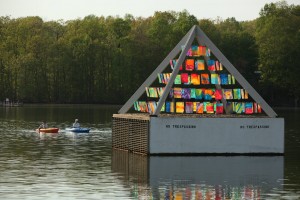 The Pyramid of Light public art project that was built on the Lake Thoreau spillway in early May will remain there through the end of August.

The Reston Association Design Review Board has approved a request from the South Lakes High School art students that created the colorful project. The student artists — Margaret Lashley, Sammy Nazam, Gabriella Rando and Tehmeena Seher Salahin — originally had permission to keep the installation, which has received high praise from area residents, on display until the end of June.

The students turned the concrete platform into the base of a pyramid built of colorful hanging plexiglass panels.

Turning the spillway into public art was the idea of James Pan, a Reston resident who suggested the concrete square that can be seen from South Lakes Drive would be a great space for art. He offered financial support if the students would work on a project, says Anne Delaney, executive director of Initiative for Public Art Reston, which sponsored the project.

END_OF_DOCUMENT_TOKEN_TO_BE_REPLACED

More Stories
Just Listed in RestonThank You to Our Advertisers