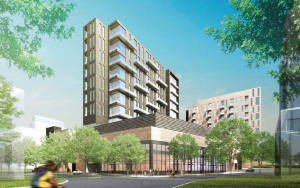 Boston Properties’ plans to build on Reston Town Center’s last remaining undeveloped parcel have been given the go-ahead by the Fairfax County Board of Supervisors.

The Supervisors on Tuesday approved Boston Properties’ plans, which include include two high-rise residential buildings with up to 549 units and nine levels of underground parking.

The plans also call for a park with a yoga area, public art and picnic areas. The 6.35-acre site, called Block 4, is currently a 251-space surface parking lot zoned for office development.

Reston Citizens Group Reston 2020 expressed disapproval last spring when it was determined that the Presidents Park area near Blocks 4 and 5 could lose 60 feet of green space to the new development.

Boston Properties purchased the site at Fountain Drive and New Dominion parkway in 2013 for a reported $27 million. At that time, Boston Property executives said they planned to change the zoning from office space to residential

Boston Properties will move the office part of the development to Block 5, where the current FedEx/Kinkos and Ann Taylor are now located, with additional office space above.

The plan calls for turning that three-story retail/office building into a 17-story building with 276,788 square feet of office space and 7,800 square feet of ground-floor retail. The building would also have four levels of underground parking.

The board also approved a reduction in parking of 22 percent (up to 192 fewer spaces) because of its proximity to future mass transit. The planned Reston Parkway Silver Line Metro Station is a half-mile away.