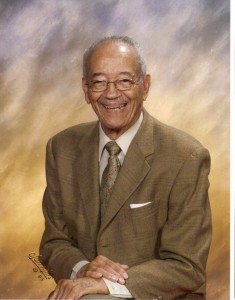 Oscar Haynes, a longtime area resident, civil rights movement leader and husband of United Christian Parish Pastor Joan Bell-Haynes, died on July 31 at his home in Herndon. He was 98.

Haynes was the only child of Oscar Haynes and Nannie Bradley Haynes. He was born in Rogersville, Tenn., on Jan. 18, 1916. He moved to Washington, DC upon graduation from Swift Memorial Junior College and became a member of Twelfth Street Christian Church (Disciples of Christ). He attended Howard University and Tuskegee Institute before being drafted into service for World War II (1941-45), serving in Tampa, Fla, India-Burma and Kearns, Utah.

Upon leaving the military, Haynes became a journalist with the Afro American Newspapers. During his tenure, he was part of a team of journalist that did investigative reporting on the Martinsville 7 Trail in Virginia. He was active in the Civil Rights Movement in Washington, DC. He joined Mary Church Terrell and other activist in “sit-ins at the bus station and local restaurants. He was among the thousands at the March on Washington when Dr. Martin Luther King, Jr. delivered his “I Have A Dream” speech, according to a death notice published in The Washington Post.

In 2008, the Disciples Historical Society of the Christian Church (Disciples of Christ) in Nashville, TN, named an Exhibit Hall in his honor.

Haynes married his first wife, Lula Mae Smith, in 1949 and they raised five children together. She preceded him in death. He is survived by his wife, Rev. Joan Bell-Haynes, his children: Toni Ross, Oscar Sherwood Haynes (Robyn); Kim A. Atwater (Jay); Donna N. Taylor, and Christina H. Haynes; as well as nine grandchildren and eight great-grandchildren; son-in-law Rev. LeBaron Taylor.

In addition to being a member of United Christian Parish, Haynes was a member of the Herndon Rotary Club.

Funeral Services will be held at United Christian Parish, 11508 North Shore Dr., Reston, on Aug. 9. Viewing will be at 10 a.m. followed by a Homegoing Service at 11 a.m. A Service of Inurnment will be held at National City Christian Church (Disciples of Christ) at a later date.

In lieu of flowers, memorial gifts may be made to United Christian Parish, The Christian Church Foundation, Christian Church (Disciples of Christ), 130 E. Washington St., Indianapolis, IN 46206 and Capital Caring Hospice. Information and condolences at www.adamsgreen.com.