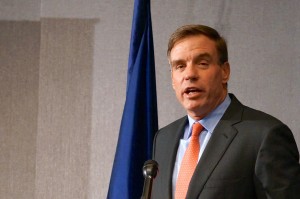 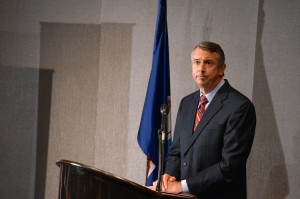 U.S. Senate candidates Mark Warner (D) and Ed Gillespie (R) were asked about a wide range of topics at Friday’s Battleground Virginia Forum at the Center for Innovative Technology near Dulles.

Among the questions: the Affordable Care Act, balancing the budget, the Marketplace Fairness Act, Virginia’s economy and student loan debt.

But the answers seemed to return to two themes: Gillespie pairing Warner with President Barack Obama and Warner pointing out his record of bipartisanship.

The event — sponsored by the Greater Reston Chamber of Commerce, along with chambers from Loudoun, Fredericksburg, and Prince William — was not a debate. The candidates appeared separately and were asked questions from a panel of chamber reps, as well as follow-ups from moderator Derek McGinty from WUSA 9 TV.

“He has voted 97 percent of time with Obama,” said Gillespie. “Instead of being a vote for us, he has been a blank check for president Obama. Since Warner and Obama took office, we have nearly twice as many people go on food stamps than we have had jobs created.”

Warner pointed out that every piece of legislation he has worked on in the Senate has been alongside a Republican counterpart. He said Gillespie comes from a partisan world where it is always Republican vs. Democrats.

“If there is ever a time to drop partisanship  and come together, that time is now,” said Warner. “If you want someone able to take arrows from both sides, I would respectfully ask you to rehire me. Don’t lose heart — there are more good people with goodwill in both parties. We have just got to and make it safe for them to work together again.”

Gillespie said too many Virginians are being squeezed in an economy with rising food and energy costs and slow job growth. “Some say we have to accept economic conditions as the new normal,” he said. “The new normal is the old mediocre — and we can do better. This is the result of bad policies and government grown too big.”

Warner says his career record speaks for itself. He referred to his term as Virginia governor (2002-2006), in which he inherited a deficit and left with a $1 billion surplus, a ranking as the best state in which to do business and the creation of 130,000 new jobs.

“As senator, I have tried to take that same approach,” he said. “My record is simple. When I agree with the president, I work with him. When I don’t, I step up.”

Warner cited across-the-aisle examples such as calling on the administration to stand up to Russian President Vladmir Putin and to build broader coalition against ISIL. Meanwhile, Warner called last year’s sequestration “stupidity on steroids,” even though he was among the 74 senators — a bipartisan mix — that voted in favor of it.

“The alternative was another government shut down, which would have been worse,” he said. “We have got to take on entitlement reform and tax reform. Until we grapple with that, we are not going to get our balance sheet in order.”

He also said the ACA is flawed and the challenge is now to fix it, not repeal it.

“What I hear constantly in Virginia is ‘we are tired of being a political football — just fix it’, ”  he said. “They want to keep prexisting conditions, women treated equally as men, keeping kids on the plan till they are 26. But there is a lot Congress did not get right.

“I would remind folks everyone loves Medicare now. Congress did not get Medicare right the first time 49 years ago. I have never invested in a business that met its business plan. The ones that work know how to adjust and change. We have got to have people who are willing to work together and change it.”

Recent polls have Warner ahead of Gillespie by as many as 22 points. Election Day is Nov. 4. Photos: Mark Warner, left, and Ed Gillespie, right, at Friday’s Forum at Center for Innovative Technology