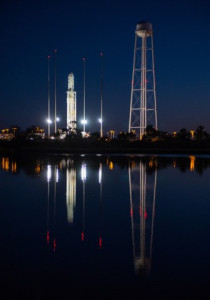 NASA’s launch of the Antares rocket was scrubbed at the last minute Monday night because of a boat in the launch area.

The launch as been rescheduled for 6:22 p.m. on Tuesday, NASA says. It should be visible in the sky over Reston as it takes off from the Virginia coast.

The powered launch sequence lasts about nine-and-a-half minutes from liftoff through the separation of Cygnus from the launch vehicle.

This mission, CRS-3, will carry about 5,050 pounds (2,290 kilograms) of cargo, the heaviest load yet delivered by a Cygnus to the International Space Station. (CRS-2, which launched in July, held 3,293 pounds of cargo.)

Check out this map from NASA that shows the best times to view the launch on the East Coast. NASA will again broadcast the launch live on NASA TV beginning at 5:45 p.m.