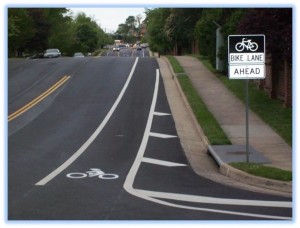 The Fairfax County Board of Supervisors unanimously voted Tuesday in favor of the county’s first Bicycle Master Plan.

This bicycle master plan maps out 1,130 miles in recommended, new on- and off-road bike routes to form a connected network across the county, says county spokesman Tony Castrilli.

This is the first such plan adopted by the county, which shows the growing demand of getting places on two-wheels instead of four, says Kelley Westenhoff, Reston Association’s Pedestrian & Bicycle Advisory Committee Chair.

The plan for more than 1,000 miles of trails and other bike connections will be a boost to the 353 miles of existing bike lanes, shared-use paths and trails already in place to form a connected network across the county.

It also represents a shift in transportation planning, considering biking as an important mode of the future.

“For Fairfax County, it means stepping up to its rightful place in attracting young professionals and families who are biking more and driving less,” said Westenhoff.

“For Reston in particular, it means the county is dedicated to helping us connect our already great pathway system with the rest of the county. As our local and larger communities become more bike-friendly, traffic speeds will drop and the sense of connectivity will increase.”

The changes won’t happen overnight. Fairfax County says it could take up to 30 years to complete.

The county bicycle master plan has been in the works for several years, building off of the county’s 2008 bike route map and the 2010 Tysons Corner Bicycle Master Plan. While Reston has made great strides in bike connectivity, some parts of the county have a long way to go, the Master Plan says.

The 2013 general county comprehensive plan says that “A keystone policy for future planning and facilities includes achievement of a multi-modal transportation system to reduce excessive reliance upon the automobile.  Regional and local efforts will focus on planning and developing a variety of transportation options. Sidewalks, trails and on-road bicycle routes should be developed as alternate transportation facilities leading to mass transit, high density areas, public facilities and employment areas.”

The approved  bike plan proposes to:

While the Reston area already has a network of bicycle and pedestrian paths — including the Reston Association’s 55 miles of paved trails as well as the W & OD Trail  — the county bike plan expands the area connectivity further, with additional trails throughout Reston.

See the entire report and proposed trail maps on the Fairfax County website.

Bruce Wright, a Reston resident and an officer of Fairfax Advocates For Better Bicycling (FABB) says the bike parking at Wiehle-Reston East is just one sign of things changing in local transporation.

“We know that when it is safe to do so, more people will take short trips by bike,” he said.  “Young people are driving less and relying more on biking and transit to get around and they want transportation options.  Now VDOT will have guidance from Fairfax about what type of bike facility is most appropriate on our roads. When new developments are proposed, bicycle access will be an integral part of the planning process.”

Wright says another step for the county is for citizens to vote for the the Transportation Bond on the ballot here Nov. 4. That bond contains $6 million on bike projects and $78 million in pedestrian projects.