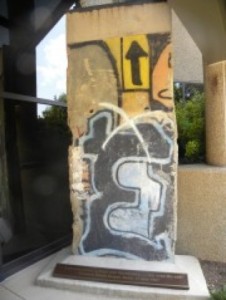 Sunday marked the 25th anniversary of the fall of the Berlin Wall.

On Nov. 9, 1989, thousands of German citizens tore it apart, symbolizing the end of the Cold War era that divided Berlin, Germany and in many ways, the world.

Some pieces of the wall remain in Berlin as part public art project, part monument to the era. But some portions are scattered in more than 100 spots around the world — and one stands here in Reston.

The German Armed Forces Command (the Bundeswehr) has offices in a typical Reston office building at 11150 Sunrise Valley Dr.

The four-foot wide wall fragment sits just outside the front doors to the headquarters. They acquired the piece in 1990 to commemorate the reunification of Germany. 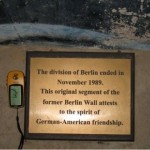 The German Armed Forces has had an office in Reston since 1991, just after the reunification of Germany. Perhaps you have seen uniformed personnel doing military fitness training exercises around the lakes in South Reston? The German troops challenge local American troops to a friendly competition annually.

The Bundeswehr also hosts an annual traditional German outdoor Christmas carnival in early December. The free Christkindlmarket has games, handmade crafts and gifts to purchase, and of course, German food and beer. Proceeds from food and gift sales are donated to Cornerstones and other local charities.

Want to to learn more about the Berlin Wall? The Goethe Insitut in Washington, DC is currently housing an exhibition “The Wall in Our Heads: American Artists and the Berlin Wall.” The exhibition will run through Dec. 5.

To read more about more than 100 other spots in 40 countries housing bits of the wall, see this Washington Post story.