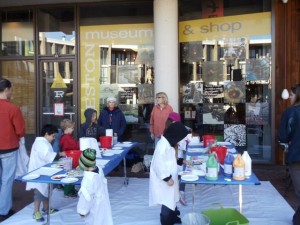 The Reston Historic Trust and Museum has been given a gift that it hopes will enable them to launch an endowment campaign and secure its future.

The owners of the museum space at Lake Anne Plaza, which the nonprofit historic trust has been renting since 1997, have given the space to the organization, says Historic Trust chair Shelley Mastran.

While the Historic Trust will still have to pay the mortgage, it gives them an asset to jump start the future, she says.

“Our goal is to be financially self-sustaining and to hire a full-time executive director,” says Mastran, who says the organization would like to raise $2 million in the endowment campaign. “The space is worth about $200,000, and we have received pledged of nearly $300,000 from board members, so we are already about $500,000 towards our goal.”

The Historic Trust’s board announced the endowment campaign and gift of the museum space at a reception at the Greater Reston Arts Center on Wednesday.

The Historic Trust, founded in 1996, hired a part-time executive director, Katie Eichler Jones, in 2013. Eichler Jones is a native Restonian and trained museum professional who has brought new energy and ideas to the organization, says Mastran.

Eichler Jones says one of her goals is to increase the outreach programs she has started.

“We want to be more self-sufficient and secure the museum’s future,” she said. “The endowment will enable us to expand our reach.”

The Historic Trust currently has an outreach in which it brings Standards of Learning-related programs to Reston public- and private-school students. Some of the subjects: “Going Green,” which is about Reston’s community gardens; “Our Community,” which covers urban planning; “Art as Science,” which looks at public art and Reston’s fountains (and has students create their own fountains); and “1964,” which looks at cultural and political history in America during the year Reston was founded.

Eichler Jones says it is particularly important to get younger residents involved in Reston’s history as the community enters its next century, as well as a period of growth with the arrival of Metro.

“We have a whole bunch of young professionals moving here who don’t have a sense of why Reston is cool,” she said. “We want them to know about our history, our public spaces and public art.”

Donations to the Historic Trust can be made on its website.

More Stories
Four RA Seats Up For Grabs in 2015 ElectionDesign Tips: How to Downsize With Style