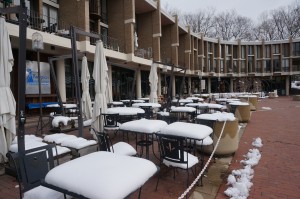 Reston is among the areas in the Washington, D.C., are under a winter weather advisory for Wednesday, says the National Weather Service.

The I-95 corridor — from Prince William County to Baltimore, should you be traveling that way for Thanksgiving — is under the advisory, which is in effect from 8 a.m. to 6 p.m. tomorrow.

* ACCUMULATIONS…2 TO 5 INCHES IN THE FAR NORTHERN AND WESTERN
SUBURBS OF WASHINGTON AND BALTIMORE. A COATING TO AN INCH NEAR
INTERSTATE 95.

* TIMING…RAIN WILL CHANGE TO SNOW BETWEEN 8 AND 11 AM WEDNESDAY
MORNING. THE HEAVIEST SNOW WILL OCCUR THROUGH 2 PM WEDNESDAY
AFTERNOON. SNOW WILL TAPER OFF LATE WEDNESDAY AFTERNOON.

* WINDS…NORTH BECOMING NORTHWEST 10 TO 15 MPH WITH GUSTS AROUND
20 MPH.

* IMPACTS…ROADS MAY BECOME SNOW COVERED AND SLIPPERY…MAINLY
ACROSS THE FAR NORTHERN AND WESTERN SUBURBS OF WASHINGTON AND
BALTIMORE. SNOW WILL ALSO REDUCE THE VISIBILITY.

Areas to the west of here, including Loudoun County, are under a winter storm warning for 3 a.m. to 6 pm. Wednesday. Those areas are expected to see 3 to 6 inches of snow in most areas and up to 10 inches in higher elevation areas.