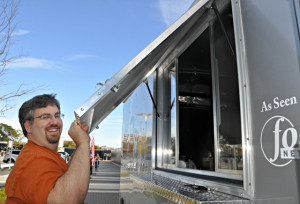 Hardy will appear on the Food Network Show Kitchen Inferno on Wednesday night.

Kitchen Inferno, hosted by celebrity chef Curtis Stone, works like this: “Contestants try and “outcook” a chain of increasingly skilled chefs to advance. With each victory the contestants face a pivotal choice: Take the money and run, or risk it all for a chance to win up to $25,000.”

Hardy says he filmed the episode several months ago and is sworn to secrecy about the outcome.

The Food Network says this: Executive Chef Ed Hardy is on a fiery mission to secure $25,000 for his wife’s chocolate shop. But standing in his way are not only the Inferno’s celebrity culinary gladiators but also the only thing hotter than the Inferno — the mighty ghost pepper.

Hardy launched Bacon N Ed’s at Reston Station, the plaza on top of the Wiehle-Reston East Metro station, in October. He cures the bacon onsite and adds it to a long list of speciality items for sale during morning and afternoon rush hours.

END_OF_DOCUMENT_TOKEN_TO_BE_REPLACED

More Stories
Del. Ken Plum: On the AgendaReston Pets of the Week: Desmond and Sawyer