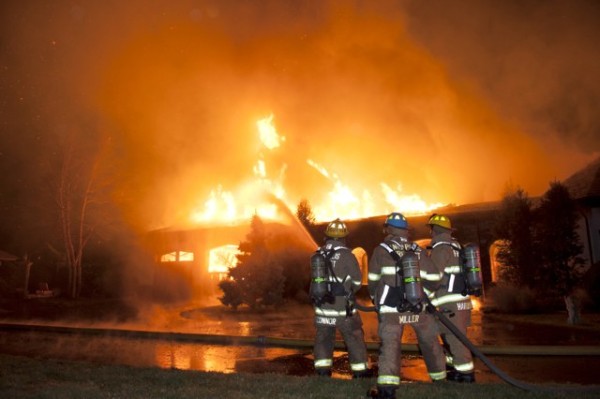 The head of a Reston cybersecurity firm, his wife and four grandchildren are confirmed to have died in the blaze that destroyed an Annapolis-area mansion.

Don and Sandy Pyle and their grandchildren Charlotte, Katie, Lexi and Wes Boone, who ranged in age from 6 to 8, were positively identified by the Anne Arundel County medical examiner, officials announced this afternoon.

The blaze that reduced the Pyles’ $6 million home to rubble was caused by an electrical failure that set a 15-foot Christmas tree alight within minutes, Anne Arundel County Fire and Police chief Allan Graves at a press conference. The tree had been cut more than 60 days prior to the overnight fire Jan. 19.

“When they’re dry, they burn quickly,” Graves said, noting investigators were still working to identify other factors that may have contributed to the size and speed of the accidental fire.

“It’s a tragic accident that occurred at the absolute worst possible time — when the Pyles and their grandchildren were sleeping,” he said.

The family was previously announced to be missing, and then presumed dead.

Donald Pyle, 56, was hired last fall as chief operating officer at ScienceLogic, a Reston-based firm that monitors networks for private and government clients, including the Department of Defense.

He was remembered on his company’s website as having a “vivacious spirit, thirst for life, and love of family.”

“Humble and brilliant, Don possessed a special leadership quality that lifted others to seek accomplishments beyond what they originally thought possible,” the statement from ScienceLogic CEO David Link said.