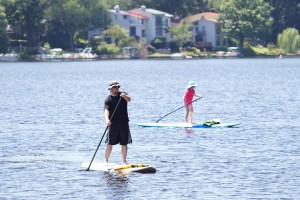 After a successful first season offering Standup Paddleboarding (SUP) classes at Lake Anne, Surf Reston is seeking to expand its operation to Reston’s other lakes.

Surf Reston has asked Reston Association for permission to offer occasional classes and outings on Lake Audubon, Newport and Thoreau, according to RA documents.

“In 2015, it is proposed that sessions better utilize all four Reston lakes,” Surf Reston operator Steve Gurney wrote to the RA Board. “Many of the RA members enjoyed seeing Lake Anne from a new perspective and inquired about paddling on the other lakes. Expanding beyond Lake Anne can lighten the footprint of the offering on any one lake in additional to providing options for RA members to explore the water in our community.”

There had been controversy using Lake Audubon when SUP lessons were first proposed for Reston in 2013. At that time, the previous owner of Surf Reston wanted to base operations at Lake Audubon. That proposal received much pushback from Lake Audubon-area residents, who did not want a commercial operation on the all-residential lake.

In 2014, there were two successful paddleboard events at Lake Audubon, said Gurney.

“The majority of sessions are five students and one instructor, ” he said. “Surf Reston would request the potential to have sessions that would not exceed 15 paddlers. For example, Reston Community Center has requested organizing a ‘trip’ for 12 paddlers. These requests would be limited in quantity and during specific day and times to minimize impact.”

Surf Reston is also working with Reston Association to try and offer SUP as part of Teen Camp and Day Camp, as well as several fitness/yoga/paddleboarding combo classes.

The 2015 schedule proposes most SUP classes at Lake Anne, but also classes and tours at Lake Audubon on alternating Wednesday evenings and monthly events at Lake Newport and Lake Thoreau on Sundays.

The RA Board will vote on the summer 2015 schedule at its Feb. 26 meeting.