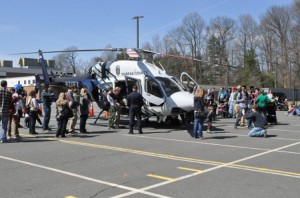 While returning to the helicopter base in Fairfax on Feb. 24 around 8 p.m., the pilot observed a bright light illuminating the chopper known as Fairfax One.

It appeared that the bright white light was following the aircraft and the beam lit up the entire cockpit. It appeared to come from a home, and police said they are working on developing positive identification of a suspect(s) and placing appropriate charges.

Police did not say the exact location of the home as the investigation is continuing.

The pilot was not using night vision goggles at the time of the incident. Had he been, the bright light would have created a temporary blindness and been extremely dangerous, police said.

It is against Virginia and federal law to shine spotlights or lasers that interfere with the safety of flights, including:

5.1-22. Interference with operation of aircraft; penalties; venue. Any person who interferes with or threatens to interfere with the operation of any aircraft, unless he is authorized by the Federal Aviation Administration or the armed forces of the United States, on or over the territory of the Commonwealth shall be guilty of a Class 1 misdemeanor. Where the act or acts of interference or threatened interference are of such a nature as to endanger the life of the aircraft’s operator or the life of any other person, the person interfering or threatening to interfere shall be guilty of a Class 6 felony. Any person who knowingly and intentionally projects a point of light from a laser, laser gun sight, or any other device that simulates a laser at an aircraft is guilty of a Class 1 misdemeanor. Venue for the issuance of a warrant for the arrest and trial of any such person is hereby conferred upon any court having criminal jurisdiction in the political subdivision in the Commonwealth where the aircraft either took off prior to such offense, or where it lands or comes to rest subsequent to such offense, or in or over which the offense occurred.

In this case a laser wasn’t used but there have been past incidents involving laser pointers, said police. Federal law prohibits this and states that pointing a laser at any aircraft, helicopter or fixed wing, is a federal crime with a punishment of up to 5 years imprisonment.

The FBI offers a reward of up to $10,000 for information that leads to the arrest of any individual who aims a laser at aircraft.