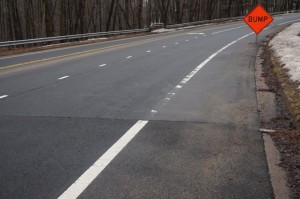 Reston Now first brought this issue to readers’ attention last week. It appeared shortly after the snowstorm in Reston the first week of March, when about 8 inches of snow and freezing rain fell here.

A concerned resident called Virginia Department of Transportation, which is investigating the road issue.

But the resident was also concerned that the two south Reston road issues were directly over RA underpasses on the association’s 55 miles of pedestrian and bike trails.

RA says in a statement on its newly designed website that it has consulted with “VDOT and has determined that the tunnel under Soapstone Drive is safe despite a weather-related bump in the road above the RA pathway.”

The pronounced nature of the bump in the road is more noticeable in winter months. The road condition is caused by settlement of the back fill on either side of the box culvert (pathway underpass) and the expansion of the soil above the underpass due to freezing.

This thinner layer of soil between the box culvert and the road surface freezes more quickly over the underpass because it is not insulated by full-depth soil. Many of the underpasses in Reston and elsewhere are impacted in a similar manner during the winter.

Because of extreme temperatures and above-average amounts of snow and ice this year, the situation on Soapstone appears worse than it has during milder winters.

Typical underpasses throughout Reston are constructed as 12-inch thick concrete boxes, designed to handle the Virginia climate as well as the traffic loads on the roads above.