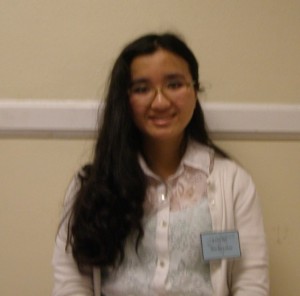 South Lakes High School’s Lina Wu was among 23 Fairfax County students honored with a Student Peace Award in a ceremony on Sunday.

For the last 10 years, Fairfax County has recognized juniors or seniors who devote time, energy and creativity to being peacemakers in local, national or international service.

Wu was honored for her concern about human rights violations and how to address them.

She is president of South Lakes’ Girls Learn International (GLI) chapter. GLI is a division of the Feminist Majority Foundation that educates and energizes U.S. students in the global movement for girls’ access to education.

She has briefed GLI members about events and actions that undermine equality and how they can be addressed. She led a panel discussion on sex trafficking and its impact on the world. She also organized several fundraisers for their partner school in Wai, India.

As vice president of the D.C. Student Advisory Board of GLI Chapters, Wu works with chapters in area schools to educate their students about current events and to teach them to create solutions to inequality both in their partner schools abroad and in their own schools and communities. Wu started an internship in February with the Feminist Majority Foundation, where she will work to expand GLI.

A poem that Wu wrote, A Real Girl, was chosen to be presented at the Girls Speak Out Summit at the United Nations in October. Her poem discusses rape and how it is often viewed by society.