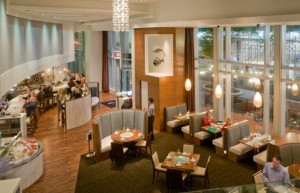 Ryan McCarthy, the manager of PassionFish at Reston Town Center, has been nominated as Manager of the Year in the 2015 RAMMYs — the awards given by the Restaurant Association of Metropolitan Washington.

The nominees were announced in an event at the Hamilton in D.C. on Monday.

The best restaurant manager nominees are a non-owner manager or general manager in the food service industry who displays the highest level of professionalism and leadership. “This person must be an inspiration and mentor to all his/her co-workers displaying outstanding service, an excellent work ethic and a positive image,” the RAMMYs website says.

McCarthy has been PassionFish’s General Manager since 2011. He previously worked at D.C. Coast and Acadiana in DC. All three of the restaurants are owned by D.C. Chef Jeff Tunks’ Passion Food Hospitality.

PassionFish opened at Reston Town Center in 2008 and consistently makes Washingtonian Magazine’s list of 100 Very Best Restaurants. There are plans to open a second PassionFish in Bethesda this year.