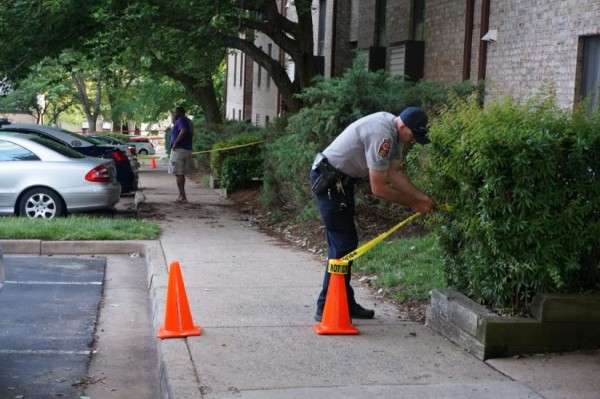 Update, 7 p.m. Sunday — Fairfax County Police say one man was killed and another injured in a home invasion robbery on Stoneview Square in Shadowood Condos on Sunday afternoon.

“Some people came forward that may have been involved,” said Caldwell. “Police are not actively driving around looking for suspects. But anyone who has information, we would like to talk to you.”

Caldwell said police believe the incident was not random and “at least one of the persons in the home knew the people at the door.”

Initial reports indicated that five men entered an apartment and engaged in some sort of disagreement, police said. There were at least two men at home in the apartment.

Police have recovered the weapons, said Caldwell. She said multiple shots were fired. The injured person was grazed by a bullet and is being treated for non life-threatening injuries, she added.

“We are still trying to determine who shot whom and what the circumstances were,” she said.

Original story, Sunday 5:30 p.m. — Fairfax County Police are searching for two suspects in a Sunday afternoon home invasion in Reston that ended with a fatal shooting.

The incident occurred in the 11600 block of Stoneview Square about 3 p.m., police said.

Police spokesman Lucy Caldwell said the incident did not appear random and the suspect and victims knew one another. The homeowner was not harmed, police said.

Police said one of the suspects was killed and one captured. Two suspects remained at large as of 5 p.m.

The suspects at large are described as two black males between 19-25 years old, police said. One was wearing a red/white/blue hat. The other had a medium afro.

The fatality will be Reston’s first homicide since 2013.

Police have not identified the deceased or the captured suspect.

Reston Now will have more details as they occur.