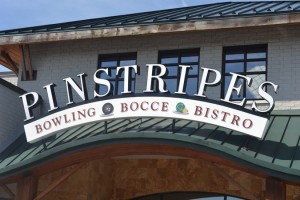 Pinstripes, the national bowling and bocce spot that has a location in Georgetown, is getting closer to two Northern Virginia locations, its CEO says.

Dale Schwartz, Pinstripes CEO, told the Washington Business Journal the Chicago-based company is close to signing a deal for a Tysons Corner location. He also said he is looking for a Reston location.

Schwartz did not elaborate on the exact location for either Virginia Pinstripes. He also said the openings could be a few years away. He said Tysons would open in late 2017; Reston two years after that.

Pinstripes already has a deal in the works to open in the new Bethesda Pike & Rose complex in 2017.

The Georgetown Pinstripes opened in late 2013. The company said shortly afterward it would like a Tysons and/or Reston location.

The 32,000-square-foot Georgetown Pinstripes, at the old Georgetown Park site, has bowling, bocce, a full bar and restaurant, and large space for special events.