The Greater Reston Chamber of Commerce honored its own on Wednesday at its annual Awards for Chamber Excellence (ACE) luncheon.

The keynote speaker at the event at the Sheraton Reston was Vint Cerf, Vice President and Chief Internet Evangelist for Google and widely known as one of the “Fathers of the Internet.” 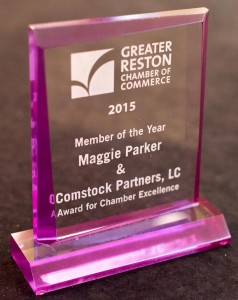 Cleveland led the Chamber through a successful year. Under Karen’s leadership several Chamber initiatives are currently being implemented, including the  Healthy Workplace Initiative; Reston Marketing Initiative; and Re-launching  of IncSpire.

Other officers elected by the membership: Charles Kapur, EagleBank (Chair-Elect and Treasurer for 2015-2016); Matt Clary of the Law Office of Matt Clary (General Counsel);

The new board also includes:

The ACE Awards are annual honors where the Chamber recognizes outstanding businesses, volunteers and committees that make the Greater Reston Chamber of Commerce a successful place to do business.