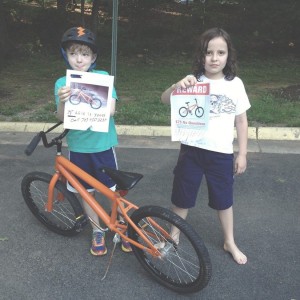 A Reston mom is hoping social media will reunite kids with their stolen bikes.

Wendy Cook is the founder of Reston Bike Shepherd, a Facebook group where residents can post pictures of bikes without apparent owners around Reston. Many of those bikes are stolen and abandoned on the trails.

Cooks says she got the idea last summer, when her son’s bicycle — a birthday present — was stolen off the front porch of their home.

“Shortly after his bike was stolen, we saw two kids walking through the backyards with a bike,” she said. “My son called to them and they dropped it and ran. I ran after them but could not catch up to them. We were able to return that bike to our neighbor’s son.”

Alas, she still has not found her son’s bicycle.

Cook said she is always seeing abandoned and stolen bicycles on Reston’s paths.

“I photographed and posted them. Then I called the police to come retrieve it and file a report,” she said. “People of Reston are finding stolen bikes ALL the time. The are being tossed into dumpsters, streams and woods. These bikes are cherished gifts from grandparents and parents and have great sentimental value to our children.”

Cook says she hopes people will be more aware of the issue and will photograph potentially stolen bikes, share them on Reston Bike Shepherd and also file a police report.

“I also want to let people know that the bikes are not safe in your yard or garage unless locked up,” she said. “Bikes have been stolen from unlocked garages, from backyard sheds and right off front porches in broad daylight. The more locks you have, the better. Also, write down your serial number!”

Cook offers these tips if your bicycle is stolen: