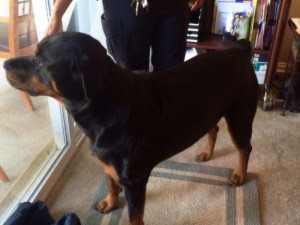 Fairfax County Animal Control officers  are asking for the public’s help in locating a local woman whose dog was involved in a violent attack on another dog in Herndon on Sunday.

Officials are seeking the whereabouts of Diana Stein, 51, and her Rottweiler. Officers have filed several charges against the dog’s owner, who has apparently left the area. Warrants against Stein include: vicious dog, failure to notify a dangerous dog being loose and attacking another dog, and obstructing justice.

Officers responded to a report of an animal running at large and dog attack in the 100 block of Laurel Way in Herndon around 5:30 p.m. on Sunday.

The Rottweiler reportedly charged a Border Collie that was being walked near the apartment. The dogs were eventually separated by witnesses. The collie required veterinary attention as he sustained multiple bite wounds, animal control officers said.

Due to the nature of the bites, the law requires that the dog needs to be quarantined. If the dog is not located, anyone suffering a human bite may need to go through the rabies post exposure series of shots.

Officers have made several attempts to contact Stein but are unable to locate her and ask for the public’s help in locating her.