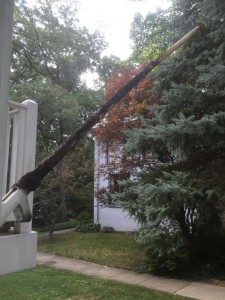 A Reston homeowner said vandals burned the American flag that was flying outside her home on Wainwright Drive on Tuesday night.

Tanya Mazarowski and her significant other, Michael, were home at the time. Neighbors alerted them to the fire on the flagpole, which is attached to their townhouse, and it was extinguished by the homeowners about 8:30 p.m.

“It’s so sad and scary this could happen here,” said Mazarowski, who moved to Reston earlier this year. “We do not think we were targeted individually. No one has any kind of beef with us. However, [Michael] is a retired military veteran of three services who served in both Iraq and Afghanistan as a Medic transporting critically injured service members home. This is crazy. And scary.”

Fairfax County Police said they are investigating the flag burning as a destruction of property case, possibly with bias. A bias crime is when a property crime is directed at a particular person, public information officer Roger Henriquez said.

“The fact that this is a symbol of the country, and on our home means we could have simply been targeted for our nationality,” said Mazarowski.

Police said they have not identified any suspects and this is an isolated incident so far.