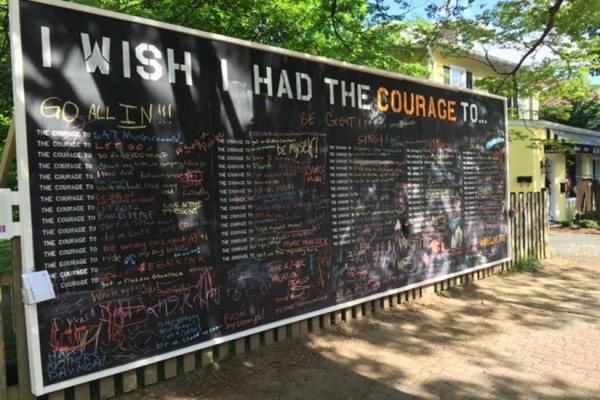 A new interactive public art display was put in place on the plaza at Reston Station on Tuesday.

The Courage Wall has gone up on the construction fencing near the BLVD Apartments on the plaza to capture thoughts of Metro passengers as they head to the Wiehle-Reston East station. It urges people to chalk-in the ending to the sentence “I wish I had the courage to….”

The piece, sponsored in Reston by Comstock Partners, is similar to the “Before I Die” project, which had a brief stay at Lake Anne Plaza last year.

“Reston Station is delighted to host the Courage Wall,” said Comstock spokeswoman Maggie Parker. “This is the start of the community conversation about who we are and what makes us tick.”

Parker said the wall will remain up until Sept. 26, when it will be replaced with the Reston Station portion of the “We Make Reston” photo project.

The Courage Wall project started in May in the Del Ray neighborhood of Alexandria. People of all ages participate in the wall to share their thoughts such as  “Forgive my mother…Start a coffee shop…Run for office…Skydive…Be the man she thinks I am…Love my body…Adopt a child…”

In July,  the Courage Wall moved to Ballston, where it stayed for two months.

Alexandria’s Nancy Belmont, owner of the branding agency, Belmont, Inc., started the wall in order to spark a conversation on courage. She says it is her hope is that the Courage Wall helps people make declarations that will lead to live bigger, bolder, more authentic lives.

There will be a special event at Reston Station hosted by Belmont on Thursday, Sept. 24. at 7 p.m. Belmont will interview three people who displayed courage to make changes in their lives as part of a “Conversations in Courage” discussion.