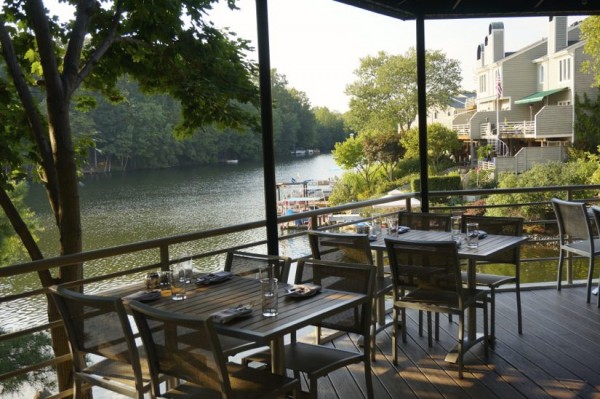 After more than a year of renovations (and renovation setbacks), Red’s Table finally opened its doors at South Lakes Village Center over the weekend.

The locally owned spot is open daily at 4 p.m. for dinner service. Lunch service begins on Sept. 28, and Saturday and Sunday brunch will be begin on Oct. 3, said co-owner Ryan Tracy.

Ryan — along with brothers Matt and Pat — have been working on the restaurant at the former Lakeside Inn space since early 2014.

Ryan Tracy says Red’s Table gets as much locally sourced meat, produce and other products as possible. Red’s also bakes its breads and desserts in-house.

Specialties of the house: craft beer on tap; oysters; grass-fed steaks; and a large selection of small plates/ appetizers.

And of course, there is the setting. In addition to gutting the inside, the Tracys opened up the part of space overlooking Lake Thoreau for a large outdoor dining deck. Watch for the deck to be open through the fall — but know that the outdoor space closes at 10 p.m. nightly due to its location close to residential neighborhoods.

The inside space remains open until midnight Sunday through Wednesday and until 2 a.m. Thursday to Saturday.