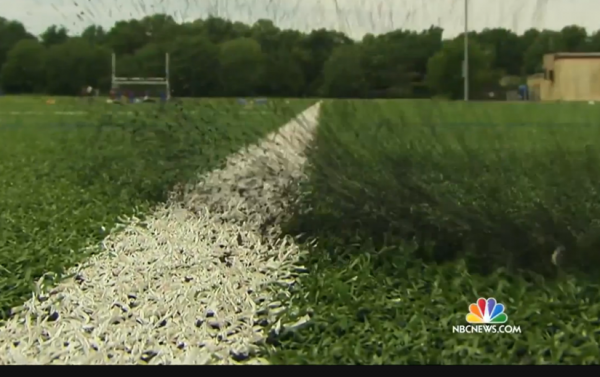 A Reston family that is greatly concerned about the use of crumb rubber in artificial turf fields and the effects on children’s health was featured on NBC Nightly News on Thursday.

Reston’s Jon and Laura Damm, both environmental lawyers, have been lobbying Fairfax County officials for more than a year to take a second look at the use of crumb rubber, which is essentially ground-up tires, in the use of artificial turf fields.

Anecdotal evidence collected by University of Washington Soccer Coach Amy Griffin shows more than 60 young players, most of them goalies, have gotten cancer in the last few years.

However, the U.S. Environmental Agency has not taken a stand on the issue, and no major study has linked crumb rubber to cancer.

The Damms are not taking any chances, however. They started a local petition last year urging Fairfax officials to replace fields.

Fairfax County, which has more than 80 turf fields with crumb rubber infill, most of which have been installed in the last few years, say they have  contacted officials in the Seattle area, where the NBC investigation started more than a year ago.

But there is not yet official data, so Fairfax County has no plans to replace fields, county spokesman Tony Castrilli told The Washington Post. However, the county says it will continue to review local cancer rates and other studies.

In the District, an Artificial Turf Task Force is also examining the issue. The D.C. Government says no crumb rubber will likely be used in future projects.

The Safe Fields Alliance, which represents turf manufacturers, said the BCA report was “misleading and without context.”

“The NBC report cited several chemicals found in crumb rubber as points of concern,” the group said in a statement. “However, this information is misleading without context and without baselines, especially given that we all eat, drink, and breathe trace levels of chemicals in our daily lives. [The] Industry voluntarily ensures the levels of any chemicals in synthetic turf fields are lower than the Consumer Product Safety Commission’s lead and chemical standards for children’s toys and the Environmental Protection Agency’s safe standards for urban and rural soils.”