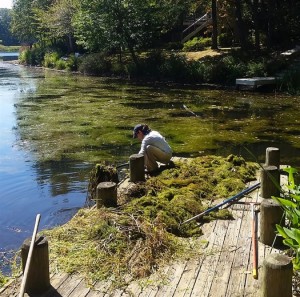 A combination of water lily treatment, shallow water and excessive lake fertility due in part to fertilizer runoff have led to an invasion of matted aquatic plants at Lake Newport.

Reston Association says the lake has been experiencing a dramatic growth of bladderwort, a submerged aquatic plant that floats to the surface forming dense mats.

“Bladderwort is unique in that it captures its food in tiny bladders, similar to the venus fly trap,” RA said in a release. “There are no health-related issues associated with the existence of this plant on the lake.”

Even though the matted plants are unsightly, they are actually ecologically beneficial.

Bladderwort is a beneficial habitat for fish and aquatic insects, turtles and frogs, says RA. And now that it is October, bladderwort, like all aquatic plants,  is expected to die back within the next 30 days when the water temperatures start to get colder.

RA says bladderwort likes to grow in shallow water and that Lake Newport. Meanwhile, Lake Newport has been filling in with sediment over the last 10-13 years and is scheduled to be dredged in 2017.

“RA has treated Lake Newport to control the white water lily.  In doing so, it opened the lake bottom sediments up to additional light. There is excess fertility of the lake with the added nutrients from the decaying lilies and runoff of fertilizer and lawn chemicals. The bladderwort reproduces quickly and is coating the entire visible lake bottom.

RA staff removed some of the bladderwort by hand on Sept. 16-17., but much of the plant still remains.”

RA says it will not be further treating the invasion this late in the season.

“Even if RA treated it this fall, the plant would still come back next spring,” said Nicki Bellezza, RA’s Watershed Manager.

Also, the association will be going to a more natural control agent next year: stocking the lake with plant-eating grass carp in the spring to feast on the new plants.