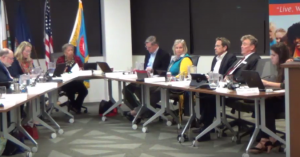 The Reston Association Board of Directors has found an surplus $1 million to keep  assessments from rising more than $15 in 2016. But what will happen in 2017?

That is the question RA Board Treasurer Dannielle LaRosa (North Point) posed to the board in a budget meeting on Monday.

Two weeks ago, LaRosa presented to the board a plan to move the cash from its operating fund reserves — which built up partially as a result of assessments being overfunded for several years.

The board liked the plan, and voted to use option two of three presented to them — to offer assessments at $657 next year, a 2-percent ($15) increase from this year’s $642 and far under the $718 assessment cap.

On Monday, LaRosa wanted to make certain the board understood that the additional $1 million won’t be there at this time next year, and without  some serious examination of future spending or an influx of revenue, assessments could rise by more than $40 in 2017 — flirting with the $700 mark.

“I honestly could not sleep without letting you know this is what we are approving,” said LaRosa.

LaRosa outlined some of the association’s biggest cost drivers. She pointed out that since 2011, RA has given 4 percent increases in salary and compensation. Professional and legal fees have increased about $240,000 in the last two years.

“We are putting off some hard choices that we are going to have to face in 2016-17,” said LaRosa.

Board members said there are some areas in which Reston should not curtail spending. Among them: keeping good employees and maintaining Reston’s assets.

“We have come to a good place with regards to 2016,” said At-Large member Ken Knueven. “I am confident we are addressing the issues a 50-year-old community has to address. Things have to be maintained. Old [RA] boards were doing a little ‘let the next board worry about it.’ This board has to step up, be frank tell the public we are going to do something about it.”

“Across-the-board cuts are meaningless to me,” he added. “Let’s start focusing on other side of equation — revenue.”

“That means an influx of dollars,” he said. “We should be raising revenue quite a bit. That in itself should do wonders in keeping assessments down.”

Take a look at the second draft of the 2016 budget on RA’s website.

There will be an additional budget meeting and public hearing Nov. 19 at RA headquarters. The board will vote on the final budget and assessment amount in late November or early December.