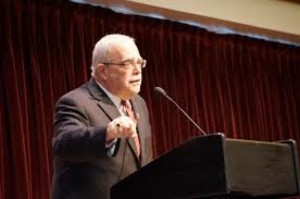 This is an op-ed by Reston resident Jonathan Damm. It does not reflect the opinion of Reston Now.

On Thursday, Rep. Gerry Connolly [D-VA 11th] was among 47 Democrats to join House Republicans to vote yes for H.R. 4038 — a bill sponsored by Republicans, which they called: the American Security Against Foreign Enemies Act of 2015, or the American Safe Act of 2015. I prefer to call it the Anti-Refugee Act. But 137 House Democrats stood firm and voted no.

Until yesterday, I admired Rep. Connolly and respected his body of work. Tragically, this one vote makes it absolutely impossible for me to vote for or support him in the future, notwithstanding his past work on behalf of the 11th District. I feel he has betrayed our fundamental Democratic values by siding with those who devised this hasty legislation on behalf of those more inclined to react out of fear to the terrorism in Paris. But we are better than that. As our national anthem reminds us, we are the home of the brave.

Of course, like most citizens, I expect the federal government to take reasonable steps to protect us against the very real threats that exist in the world. But voting to add a layer of unnecessary delay and burden to the process for refugees entering our country was completely unnecessary.

Just a little research shows that the vetting process is already 18-24 months long, and before the events in Paris, there was no large movement calling for any changes. In other words, the system works; it is not broken. Hundreds of Syrian refugees have been processed in this country since 2011. They have not attacked us.

So why on earth did Rep. Connolly choose this odd time to break from our Democratic ideals of welcoming refugees and immigrants into this country? Only he can answer that. But the answers he has provided thus far are entirely unacceptable and hint at an adolescent immaturity, which is quite frankly disturbing.

If you look closely at some of the remarks made by Rep. Connolly and his fellow Anti-Refugee colleagues — in the wake the vote — they seem to be saying that the Obama Administration wasn’t persuasive enough. For example, Rep. Connolly said the following, “It isn’t what it was characterized as, so why would we oppose that?” Steve Israel [D-N.Y.] also voted with Republicans and said, “I’ve seen better presentations in my time here.”

There is a well known deep-seeded animosity among some Democrats on the Hill who are upset that the Obama Administration lacks ideal communication skills. But that is hardly a reason to vote yes on H.R. 4038. What a historically inopportune time to essentially throw the equivalent of a childish tantrum.

The bill is not long at all and clearly creates administrative burden and delay. Rep. Connolly should have easily been able to read it for himself and draw that obvious conclusion. Here is a particularly relevant section of the very short bill:

(b) Certification by unanimous concurrence

So the Administration was correct to assert that H.R. 4038 would add unnecessary delay to an otherwise sound system for vetting refugees. These are additional legislative requirements on top of an already lengthy and thorough vetting process.

And Rep. Connolly actually acknowledged the problem. He said, “They are concerned that the … consequence of this is to simply add to the difficulty and timeline of status approval. So what’s already an 18- to 24-month process could become twice that,” [a]nd obviously … no one wants that as an outcome.”

But he wishfully supposed that some administrative magic would smooth out the additional layers and perhaps make the process just a little bit less onerous. He said, “can’t we work that out administratively by adding resources, delegating certification, maybe even collapsing all of this into a more expedited, accelerated process across the board?”

Well that is wishful thinking and pure subterfuge. The Administration wisely and correctly noted very quickly that, “we don’t have the staff.” Has Rep. Connolly been asleep over the past seven years as the size of the Federal government has continued to shrink due to budget cuts? His remarks, excuses and callousness are astonishing to me.

There is no way to get around the fact that these are additional requirements. How much delay might they cause? At 30 minutes a refugee, if there are 10,000 refugees, it would take 300,000 minutes or nearly 2.5-years of full-time work on behalf of the Secretary of Homeland Security and the Director of the FBI just to meet this new statutory requirement to vet and certify all the refugees by unanimous concurrence. That is on top of the 18-24 months it already takes to fulfill all the other vetting requirements already in place. Plus, the Secretary and Director have many other important duties.

So it is absurd and disingenuous for Rep. Connolly to suggest that this is somehow an innocuous bill. It clearly adds time consuming layers of bureaucracy on top of an already long process. Rep. Connolly said administering this bill is “just a matter of mechanics, it’s not a matter of principle or statute,” [a]nd that’s not a good enough reason for me to vote no.”

I disagree with every fiber of my being. He is wrong about it being just about mechanics. And he is immoral to say this is not about principle. My grandfather escaped Nazi Germany during WWII. I am an American today because the people of our country have always stood up and welcomed refugees and immigrants. As the words next to the Statue of Liberty proclaim:

“Keep, ancient lands, your storied pomp!” cries she
With silent lips. “Give me your tired, your poor,
Your huddled masses yearning to breathe free,
The wretched refuse of your teeming shore.
Send these, the homeless, tempest-tost to me,
I lift my lamp beside the golden door!”

Representative Connolly and 47 Democrats betrayed these words and our common humanity. Unless Rep. Connolly repudiates, apologizes and admits his vote was a tragic and thoughtless mistake, I will never vote for him again.

Something on your mind? Send an op-ed to Reston Now at [email protected] Reston Now reserves the right to edit entries for style, spelling and adherence to our terms of service.