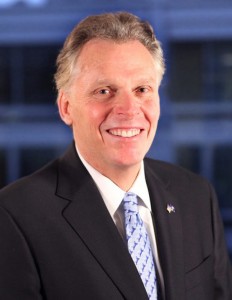 Virginia Gov. Terry McAuliffe (D) was in Fairfax County on Wednesday to announce a proposed $1 billion investment in education, both at the K-12 and college levels.

The governor, speaking at Mark Twain Middle School in Alexandria, says his two-year budget proposal aims to prepare all students to succeed in the “new Virginia economy” by providing them with needed resources.

“I have heard from parents, students and teachers all over the commonwealth that we have been asking our schools to do more and more with less and less,” McAuliffe said. “But with thoughtful, bold ideas like the ones I am proposing, we will get back on the right track and ensure that we are laying the foundations for the New Virginia Economy.”

Some of the public education priorities funded in the biennial budget include:

McAuliffe will present his full two-year budget to the Commonwealth Budget Committee on Thursday.

It is not yet known exactly how the commonwealth’s additional funds will directly impact Fairfax County Public Schools. However, FCPS has said it is facing about a $65 million budget gap for Fiscal Year 2017.

FCPS Superintendent Karen Garza will announce a proposed budget in January, which will be voted on by the board by May. A community Budget Task Force has looked at various changes, including larger class sizes and eliminating language immersion programs, as a means of narrowing the gap.

The Fairfax County Board of Supervisors, which gives about half its annual budget to FCPS, said part of the deficit starts at the state level. Board of Supervisors Chair Sharon Bulova said last week the state’s contributions have not kept pace with rising enrollment and other mounting budget needs in public schools.

“The state has reduced its share [of funding all Virginia schools] by $1 billion,”Bulova said at the Supervisors’ Dec. 8 meeting. “Counties have tried to make up the difference. In Fairfax, we have increased about $200 million for schools.”

Grassroots group #IamFCPS said it was encouraged by McAuliffe’s pledge.