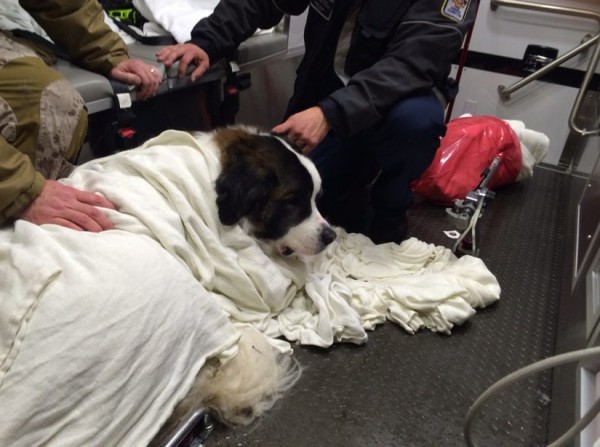 Fairfax County Fire and Rescue crews were called to a partially frozen lake to make a rescue just as the storm picked up Friday night. The citizen in peril was a large dog that had fallen through the ice.

The rescue happened on the other side of the county in Fairfax Station, but we’re posting it here to show the skills and heart of all Fairfax County Fire Rescue medics.

Milo, a Saint Bernard, walked out onto the ice at Woodglen Lake in Fairfax Station as his owners were tubing nearby, firefighters said. At the time of rescue the temperature was 21 degrees with a wind chill of 8 degrees and blowing snow.

When firefighters arrived, the found the dog about 30 feet from shore, so they formulated a rescue plan that included rescuers jumping into the icy water.

Fairfax County medics and firefighters routinely train for ice rescues. They can sometimes be seen on Reston’s lakes (if they are frozen) practicing drills.

The dog was rescued from the freezing pond and placed in the medic unit for drying and re-warming. After about 30 minutes, the dog and owners were taken home and warming efforts continued.

Firefighters said late Friday that the dog is doing well. After rewarming the dog appears healthy and in no distress, they said.

Check out video of the rescue on Fire Rescue’s Facebook page.