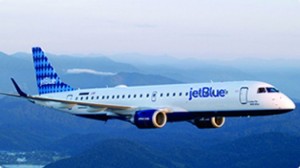 A Reston man has been charged with assault after he allegedly attacked a fellow passenger and two flight attendants on a Sunday flight from Washington to Jacksonville, Fla., federal authorities said.

The U.S. Attorney’s Office in Jacksonville said Joseph Michael Sharkey, 36, was a passenger on Jet Blue Flight 715 when he verbally assaulted another passenger and then placed that passenger in a headlock.

He also tried to open the plane door in flight, according to a criminal complaint.

“When ordered by a flight attendant to return to his seat, Sharkey at first complied but then assaulted the flight attendant and made an effort exit the airplane through an exit door,” according to the federal criminal complaint.

“Sharkey was stopped by another flight attendant, but then fought with him, kneeing him in the groin. The flight attendants enlisted the help of volunteers and subdued Sharkey, placing him in flex cuffs for the remainder of the flight. ”

When the flight landed safely in Jacksonville, Sharkey was removed from the flight by airport police.

Sharkey is being held in Jacksonville and will have a formal hearing on Wednesday.

According to the criminal complaint, Sharkey had four alcoholic drinks during the flight.

Sharkey has been in similar trouble before. In 2012, when he was a resident of Woodbridge, he was accused of stealing a truck through a security fence there while under the influence of alcohol, according to news reports.

In that incident, he was charged with burglary, grand larceny auto, destruction of property, driving under the influence of alcohol (his third offense in 10 years), refusal to submit to a breath test and driving on a revoked license.